Most of the ADSS optical cables are used for the transformation of old line communications and installed on the original towers. Therefore, the ADSS optical cable must adapt to the original tower conditions and try to find the limited installation “space”. These spaces mainly include: the strength of the tower, the strength of the spatial potential (the distance and position from the wire) and the distance from the ground or the crossing object. Once these interrelationships are mismatched, ADSS optical cables are prone to various failures, the most important of which is electrical corrosion failure.

GL Technology is a professional ADSS fiber optic cable manufacturer. With nearly 17 years of production experience, we have a professional team to provide rich technical support. Today, let’s briefly explain the electrical corrosion faults of ADSS fiber optic cables. Generally speaking, they are divided into three types. Breakdown, electrical tracking and corrosion are collectively referred to as the three main phenomena of electrical corrosion. These three modes often have comprehensive failures at the same time as the fittings, and it is not easy to strictly distinguish them.

1. Breakdown
Due to various reasons, an arc of sufficient energy occurred on the surface of the ADSS optical cable, which generated sufficient heat to cause the cable sheath to break down, usually with a perforation with a molten edge. It is often accompanied by simultaneous burning of the spun fibers and a sharp drop in the strength of the optical cable. The cable is broken when the tension cannot be maintained. Breakdown is a type of failure that occurs in a short period of time after installation.

2. Electric trace
The arc forms a radiating (electrical dendritic) carbonized channel on the surface of the sheath, which is called electric trace, and then it continues to deepen, cracks and exposes the spun under the action of tension, and sometimes converts to a breakdown mode. Electric tracking is a kind of fault, and it takes longer to occur after installation than in breakdown mode.

3. Corrosion
Due to the heat generated by the leakage current through the sheath, the polymer slowly loses its binding force and eventually fails. It is manifested in the rough surface and thinning of the sheath. This phenomenon is called corrosion. Corrosion occurs slowly and is normal during the life of the fiber optic cable. 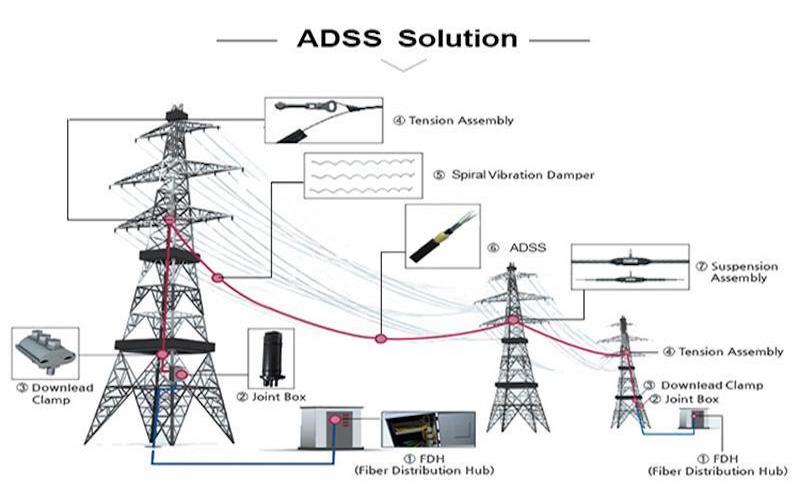